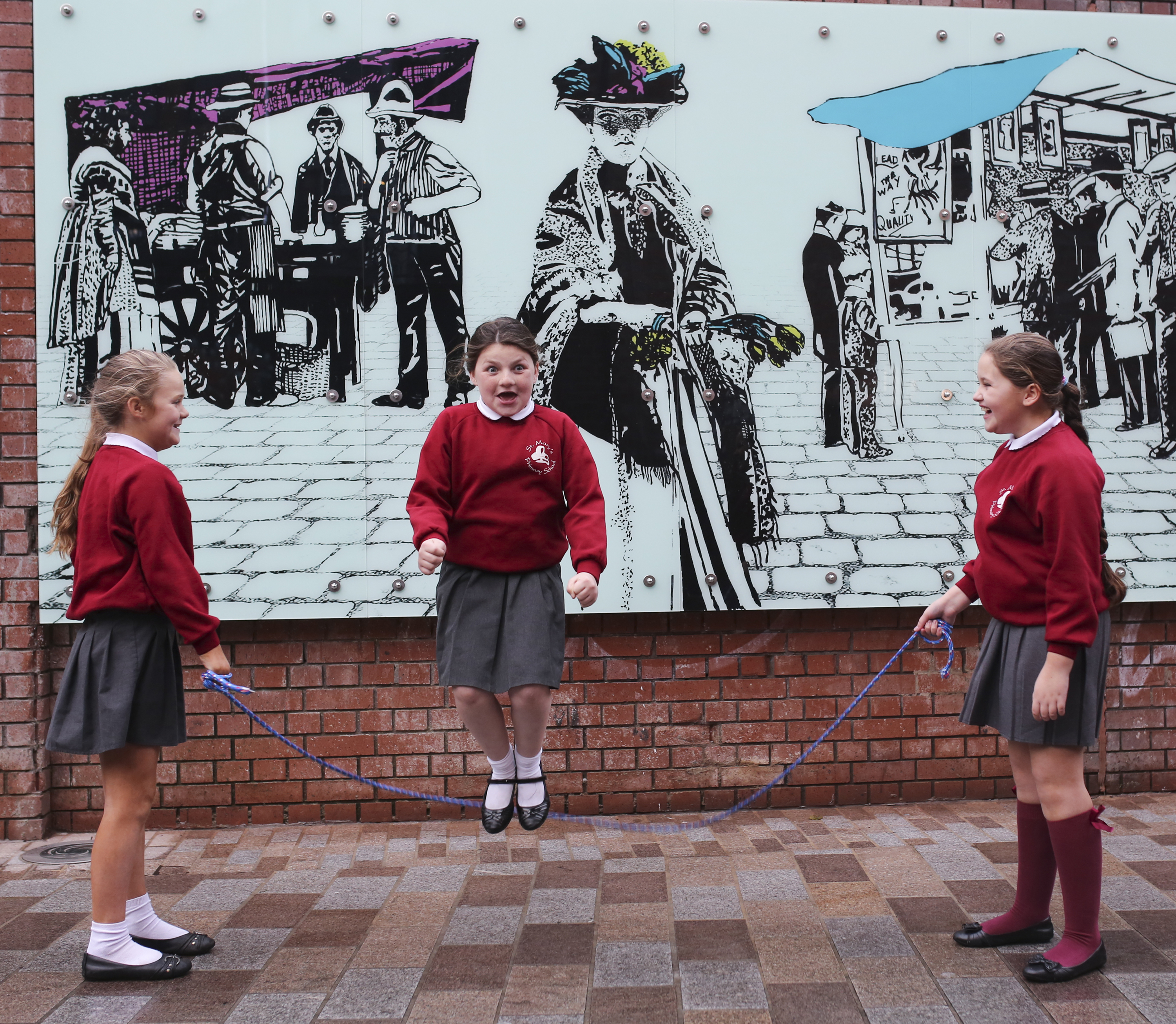 A symbolic new piece of public art which flows into one of Belfast most historic areas was unveiled on Wednesday, October 21, taking people back to the city’s rich and colourful past.

The magnificent 3D sculptural work created by artists Annemarie Mullan and Stephen Mackey in association with King Street Arts, is aimed at attracting people into beautiful Bank Square with its pubs, restaurants and galleries and open air Folktown Market, the focal point of a growing new cultural quarter.

The artwork with the Farset River at its heart is the final piece in the £3million refurbishment of Bank Square by the Department of Social Development that included the installation of natural stone paving, improved lighting and street furniture, along with the launch of the Thursday Folktown Market.

It is composed of a series of vivid street scenes which give a fascinating pictorial history of the area with its strong, hardworking women and men, and children playing traditional street games.

The artwork, which is based on the local heritage of the area, starts in Berry Street East adjacent to Royal Avenue and winds its way into Bank Square using a series of scenes of everyday life in 19th century Belfast.

The work, which runs along a wall belonging to the Castlecourt complex, uses a range of materials including Perspex prints, wrought iron and wood. The historic content is based on a report carried out by the Ulster Historical Foundation which listed the trades and the people who lived and worked in the area.

Sophie Rasmussen of King Street Arts said:  “Annemarie Mullan has created these scenes which are small windows to the past, while Stephen Mackey has used Iroko wood from Africa to recreate the serpentine Farset River, which runs underneath Castle Street.”

Artist Annemarie Mullan, who designed the piece using information from the 1898 census, said it was a tribute to all the people who lived in the area. She added that the river theme, as well depicting the Farset, also symbolised the rhythm of the folk music that was a feature of this colourful area of the city.

Although the images of children playing hopscotch and swinging around the gas lamps are in Victorian attire, Annemarie said they were a tribute to the late, great BBC producer and musician, David Hammond who made the famous 1971 film ‘Dusty Bluebells, using the P7 Class of St Mary’s School from the area.

She added: “It’s a reflection of turn of the century Belfast capturing the workers and children playing street games, the brewery, the fish market and the haberdashery shops. I chose Perspex because I wanted to bring in some reflected light and recreate the shop windows of Royal Avenue.”

The piece begins with a scene from Napier’s Brewery, with brewery staff, dray horses and carts and a beautiful wrought iron gate with a clock. The artwork tells the story of the area as visitors make their way along Berry Street East into the new square.

The Farset River played a key role in the lives of the people of this area in the west of the growing city. Bank Square was known as the ‘Back of the River’ and was composed of small houses and businesses located outside the city walls.

Another pictorial scene represents the ‘Fadgies’ – Irish speaking people from the Omeath area who came to Belfast to sell fish and fruit to the local townsfolk.  There is another representing the clothes makers and shops that lined the area which was part of the larger commercial district of Smithfield. There are other trades such as chimney sweeps, waiters and flower sellers represented.

The artwork includes some of the quaintly named streets of the area such as ‘Squeeze Gut Entry’ (so named because of its narrowness) and ‘Crooked Lane’, which is now Chapel Lane.

It also refers to many of its notable buildings, such as the city’s first hospital – the Belfast Dispensary and Fever Hospital in Berry Street, which was the precursor to the RVH.

At the end of the artwork in Bank Square, the river reduces to a stream and the final image is of the musicians who played in the street to entertain market-goers. This tradition is continued at the weekly Folktown Market.

Sophie said: “This was a very musical area. There was an instrument maker plying his trade here so this artwork reflects many of the trades that were here, the lives of its residents. It is a perfect representative of what we are trying to do in keeping alive old traditions.” 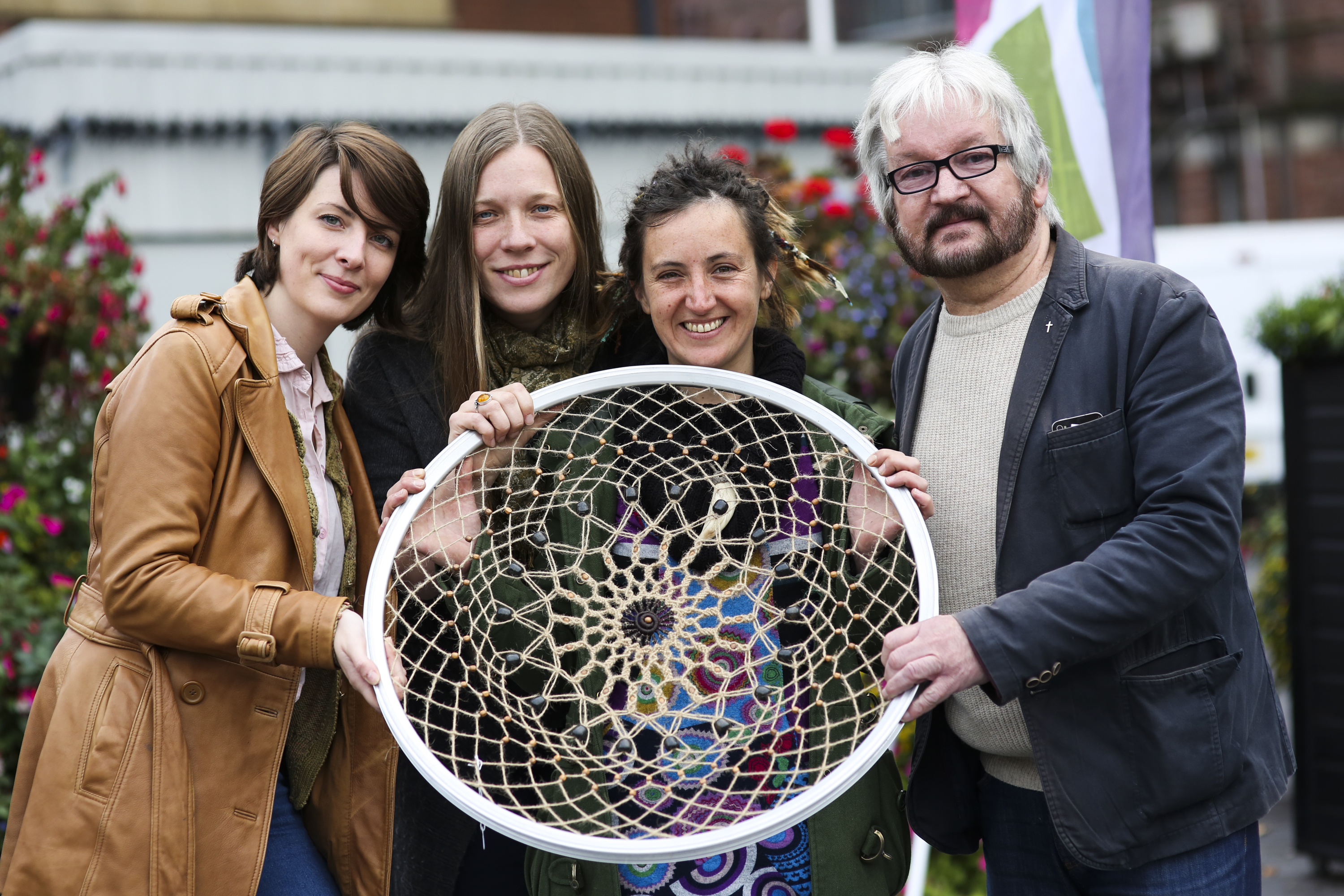